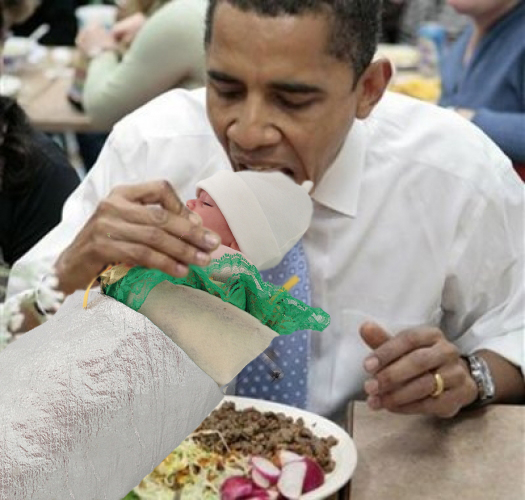 Have you ever heard an older person say something along the lines of “That’s so cute I could just eat it up?” Well as creepy as that is. Von Vivant Baby created this adorable baby burrito blanket swaddle set that even comes with a tortilla hat. This baby burrito set is so cute its guaranteed to make people want to kidnap your baby.  If you thought having your baby kidnapped was the worst thing that could happen, you must not have read that Barack Obama has been seen eating babies!

Barack Obama loves baby burritos. He also loves kissing babies at political events. What you may not have heard however, is that Barack Obama is actually tasting the babies, while making it look like a simple presidential kiss. At his last primary a women handed Barack Obama her baby, which happened to be dressed up as a baby burrito. When Obama got his hands on that adorable burrito, he didn’t even get a solid look at it before he sank his presidential teeth into that newborn baby burrito.

This is the perfect gift idea for anyone that just had a baby. It’s also a great gift for anyone who loves burritos, or Mexican food in general. The baby tortilla hat can be used by adults as well. Who doesn’t want to let the world know that they love burritos? The best way is to use your baby as an advertisement that says “this is my baby burrito, and we are the burrito family!”